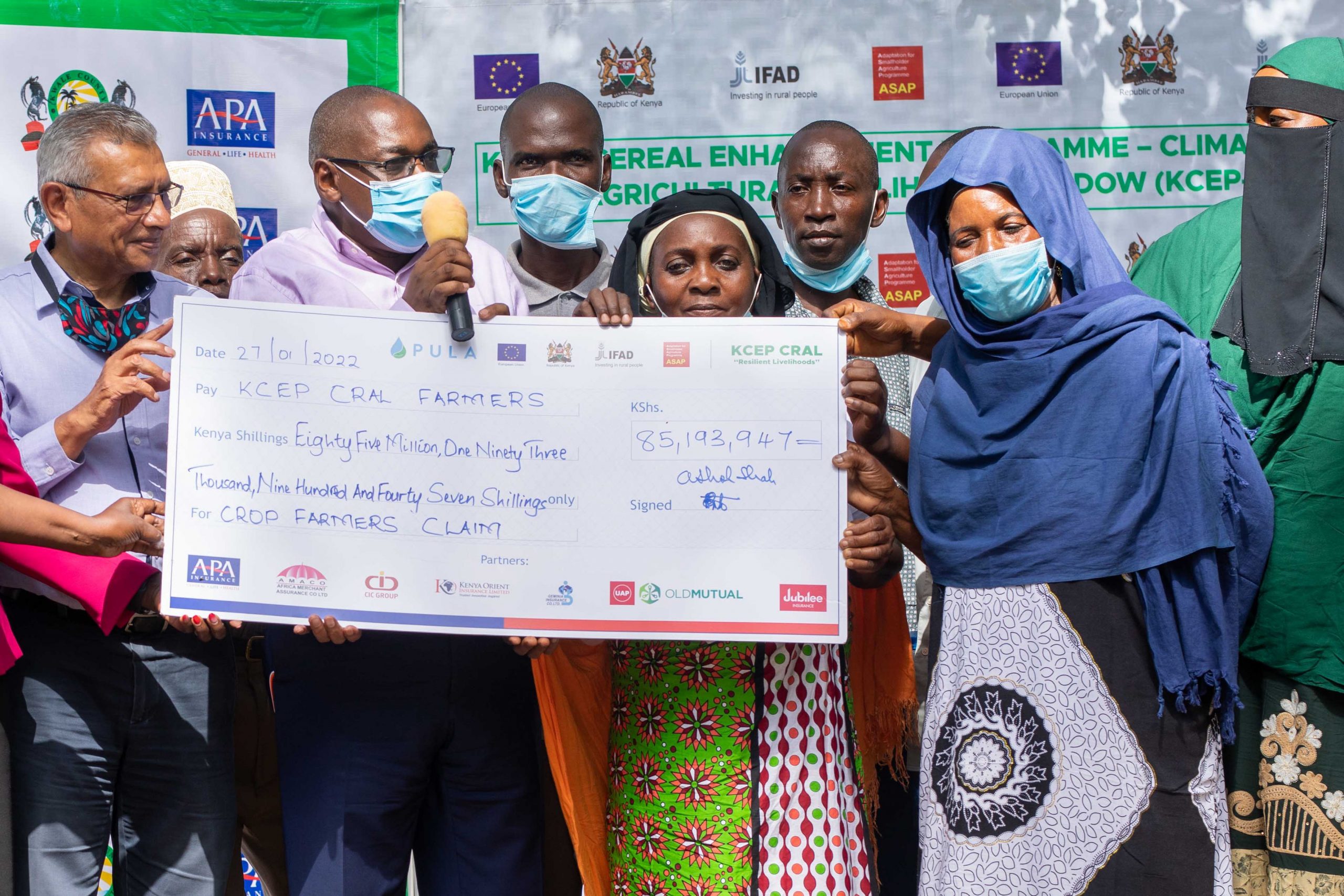 Fatuma Rashid needed to make a decision: if she bought agricultural insurance, how likely would she receive a payout in the face of a poor harvest? This is a common concern among smallholder farmers; paying for insurance means parting with cash earmarked for other, potentially more important needs. But buying insurance for farmers in the arid and semi-arid lands in south-east Kenya proved a good move.

In January 2022, Pula and APA Insurance paid out nearly $750,000 in claims to 11,414 smallholder farmers in Kenya. The farmers had been affected by drought that lasted between July and October 2021 in Kwale, Taita Taveta and Kilifi counties in Kenya’s coastal region. On average, each farmer received around $66, having paid less than $11 in premiums at the start of the agricultural season. These farmers had benefited from Pula’s area yield index insurance cover. The product protects smallholder farmers comprehensively against risks such as droughts, floods, pests and diseases. This helps to improve farmer resilience especially in the face of unpredictable rain patterns, frequent droughts and the emergence of new pests.

The product is simple: historical data is used to determine an expected yield for a given area. At the end of a season, Pula carries out crop cutting exercises to measure actual harvest yields. If yields were found to be below the expected benchmark for that area, farmers’ are due a claim payout. This insurance policy covered farmers in the arid and semi-arid lands of Kenya, under the government-led Kenya Cereal Enhancement Programme Climate Resilient Agricultural Livelihoods Window (KCEP-CRAL). Supported by the European Union, IFAD and the FAO, the programme had reached over 100,000 farmers by the end of 2021. Funded by the Swedish International Development Co-operation Agency (SIDA), IFAD’s technical assistance programme, INSURED, has been supporting Pula in providing insurance to KCEP-CRAL farmers. Many farmers under KCEP-CRAL suffered significant losses due to drought in 2021. The effects of a drought transcend crop losses for one season. A poor harvest is likely to leave farmers short of funds. In turn, this may leave them unable to repay loans taken out at the start of a season to purchase seeds and fertiliser, and limit the inputs they can purchase for the following season. The drought won’t just limit a farmer’s income; it can affect their future.

Agricultural insurance can protect farmers from the spiral of debt and low production. Buying insurance is similar to purchasing a promise; a promise that you will be compensated should you suffer misfortune. Paying farmers in full and on time helps to build and maintain trust among smallholder farmers that insurers can keep their promises. With the season ending in November 2021, farmers in the counties covered received their payouts 45 days later, via mobile money in January 2022. This was in time for them to plan for the upcoming March 2022 agricultural season.

For the farmers affected, a promise was kept. Around 400 farmers attended a public ceremony to celebrate the farmers’ payout achievement. For insurance providers, paying out claims is important. It shows that insurance works and can protect livelihoods – both to those affected and to sceptics. Paying out claims publicly with fanfare is more than a spectacle. It can generate further awareness and can forge a culture among farmers of buying insurance as a means of protecting livelihoods.

What makes Pula and other agricultural insurance providers successful are the partnerships created to deliver insurance to smallholder farmers. Central to this is having the government as one of the main partners. Agriculture remains a vital part of economies across most of Sub-Saharan Africa, making the sector a priority for many governments.

KCEP-CRAL showcases how a government-backed programme for farmers can work well. Farmers under KCEP-CRAL are typically provided a bundle of complementary services, such as high-quality inputs, access to market and crop insurance. Uniquely, insurance was identified as a key product requirement and was included as a core offering to farmers from the onset. This has contributed to the programme’s success. The payout event held on 27 January 2022 publicly affirmed that agricultural insurance does work – with the right partnership structure in place. Farmers that received claim payouts at the event understood how their premium payments had cushioned them against the impact of climate change, and could continue to protect their future livelihoods. The Kenyan government saw that agricultural productivity could be safeguarded through insurance, while Pula and APA Insurance can hope to benefit from greater awareness and trust.

Fatuma Rashid attended the payout ceremony, relieved with the expected outcome. She’d made the right decision, leading to compensation for the crop losses she’d suffered. But it wasn’t just beneficiaries like Fatuma in attendance. Musa Omar Mlamba had attended the event too. He hadn’t bought the insurance policy. But seeing the benefits that Fatuma and others were now experiencing, he intends to sign up for insurance for the next season.

More information can be found at the following links:
Pula's website