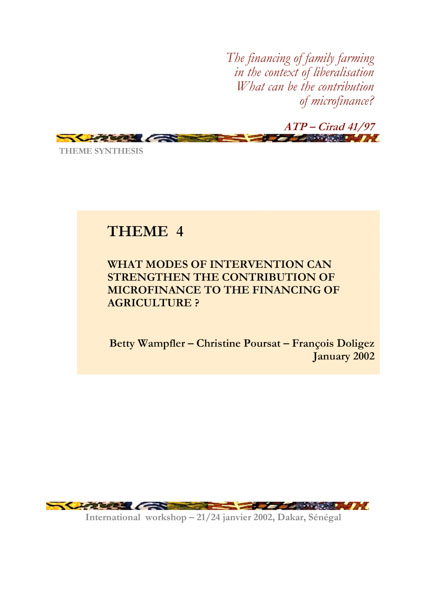 What modes of intervention can strengthen the contribution of microfinance to the financing of agriculture?

Although the fields of intervention of aid for development have changed considerably over the past 15 years, support for agricultural development remains a major investment for most donors. Agricultural modernisation issues are still important: the covering of food requirements in the southern countries, foreign currency earnings by export crops, participation in the economic development of rural zones, contribution to reducing rural exodus, etc. However, the financing of agriculture remains a strong constraint in the modernisation process. The institutional innovations in decentralised financial services or ‘microfinance’ during the past 15 years have only partially removed the constraint. By dismantling the remaining public agricultural financing systems, liberalisation is giving the question of financing renewed acuteness.

This paper was presented at an international workshop in Dakar, Senegal, in January 2002. It is concerned with the role that donors can play in facilitating the supply of sustainable financial services suited to the needs of agriculture. The first part consists of a brief historical reminder of how interventions in rural financial services have changed in the years since countries gained their independence. The second part is an analysis of the main modes of intervention currently used by donors in West Africa with regard to their effect on the financing of agricultural activities. They noted:

The researchers concluded that the evolution of intervention modes in microfinance and the priority accorded to the financial consolidation of institutions have led to separation from the problems of the financing of agricultural activities. The microfinance and agriculture sectors are now strongly compartmentalised and scope for inter-sectoral dialogue is reduced both at the local level (little dialogue between MFIs and farmers’ organisations in the field) and at the national level (no consultation between professional institutions).

To effect improvement they recommended that donors should continue to support the development of microfinance and promote its diversity; renew their efforts in innovation to create appropriate intermediation models; improve their tools and procedures for guaranteeing loans; enhance meetings and dialogue between the agricultural and microfinance sectors and promote financing tools that are better adapted to the constraints of microfinance and the requirements of agriculture, e.g. long duration tools (10-12 year programmes) with no interruption and with regular evaluation procedures to enable readjustment and adaptation to the rate of evolution of populations.