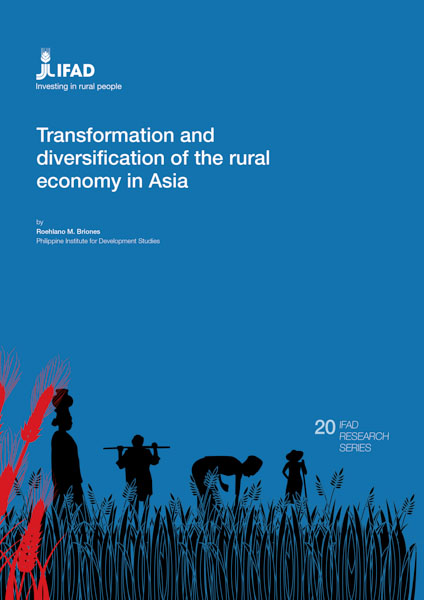 Transformation and diversification of the rural economy in Asia - English

Transformation and diversification of the rural economy in Asia

his paper seeks to analyse the transformation and diversification of the rural economy in Asia, focusing on the implications for income and employment opportunities for rural communities. Rural non-farm employment is a sizeable component of rural employment, tends to concentrate in services, and over time has grown more quickly than agricultural employment. Non-farm income accounts for a significant share of rural household incomes.

The indirect contribution of agriculture to GDP is sizeable in relation to its direct contribution; in a growing economy, the ratio of indirect to direct contribution rises over time. Rurally based agroprocessing (typically export-oriented) will be a prominent feature of the non-farm economy in some areas and agricultural value chains. Overall the impact of agricultural growth on non-agricultural sectors is mixed; it is likely, though, that such impact is conditional on other factors, such as location. Spatial development involves the formation of an urban hierarchy with a metropolitan centre linked to intermediate cities, rural towns and villages. For rural areas, proximity to towns and cities boosts non-agricultural activity as well as farming of products that specifically cater to urban demand. In exceptional cases, expansion of the rural non-farm sector will be pioneered by manufacturing, thereby following the pattern of rural industrial clusters in East Asia. On the whole, though, the main pathway for rural non-farm growth in developing Asia is still expansion in non-tradeables (i.e. services).

Strategic directions for rural non-farm development include: (i) widening the outreach of formal rural finance entails integration of some of the features of informal finance; (ii) investment evaluation of agricultural development projects should consider second-order interactions between farm and non-farm activities in both rural and urban areas; and (iii) strengthening urban-rural connectivity involves a comprehensive attempt to influence the location and technology choice over time of both urban and rural enterprises.

This paper suggests a role for a cluster-based industrial policy to further support the rapid expansion of rural non-farm employment. In some areas, this will be composed of rural industries; services will nonetheless continue to comprise the bulk of the rural non-farm economy, drawing its impetus primarily from interaction with existing or emerging urban centres.