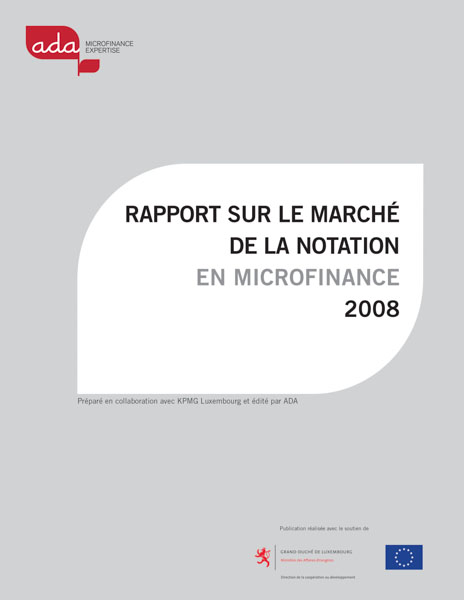 This report aims at providing an overview of the state of the microfinance institutions rating market as at the end of 2007 and is based on data collected directly from the rating agencies. 2007 saw demand within the microfinance rating market grow by 19.5% and 539 ratings were performed bringing the global grand total to 2,280.

The previous 2006 report identified several market trends. These included the increasing levels of private investment in the microfinance industry and the need for MFIs to attract these resources in order to sustain their growth. Indeed, it can be safely assumed that these trends were confirmed in 2007 as highlighted by the 35% growth in international investments in MFIs. Aspects such as the Basel II Accords and the pressure from MFI stakeholders for more transparency and better governance within the microfinance sector have further contributed to the overall growth of the market.

The report points out that mainstream credit rating agencies are increasing their market share in the field year after year. This situation has remained constant despite the fact that specialized microfinance rating agencies have responded dynamically to the changing microfinance market by expanding geographically, consolidating their activities, and diversifying their products.

One such product diversification includes the development of the social performance evaluation, also called a social rating which is reported for the first time. This growing interest of private investors (both socially oriented and for-profit commercial) is certainly financially profitable for the microfinance field and its sustainability.

However, the microfinance players should not lose sight of their social mission and the poorer should

not be excluded from the borrowing facilities because of a higher risk of default and social ratings help MFIs to maintain their social mission.

A further challenge to the rating market that was identified in the 2006 Outlook report was the closing of the Rating Fund and whether demand would decrease as a result. Seen as the Fund was still running in certain regions in 2007, it is still too early to analyze the effect on demand but what has become apparent is the fact that the Rating Fund contributed to the growth of the rating market without creating an artificial market.