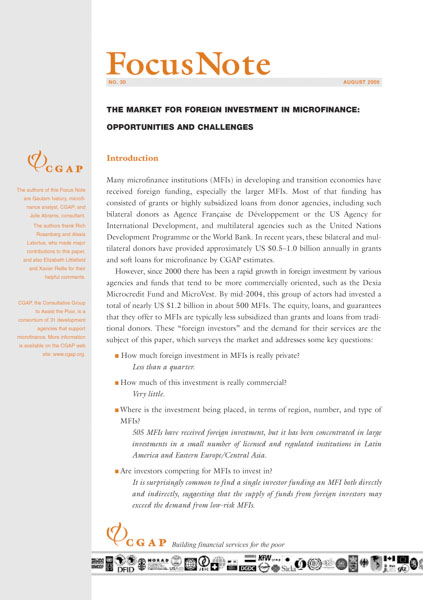 The Market for Foreign Investment in Microfinance: Opportunities and Challenges

This paper begins by highlighting that many microfinance institutions (MFIs) in developing countries have received foreign funding, especially the larger MFIs. Most of that funding has consisted of grants or highly subsidised loans from donors. CGAP estimates that in recent years, bilateral and multilateral donors have provided approximately USD0.5-1.0 billion annually in grants and soft loans for microfinance.

However, the paper also notes that since 2000 there has been a rapid growth in foreign investment by various agencies and funds that tend to be more commercially orientated. By mid-2004, this group of actors had invested a total of nearly USD1.2 billion in about 500 MFIs. The authors note that the equity, loans, and guarantees that they offer to MFIs are typically less subsidised than grants and loans from traditional donors.

These “foreign investors” and the demand for their services are the subject of this paper. It surveys the market and attempts to address some key questions:

In this paper, the term “microfinance institution” includes NGOs, cooperatives, banks, and licensed non-bank institutions that focus on delivering financial services to microentrepreneurs and other low-income clients, generally using lending techniques that have been developed during the last 25 years.