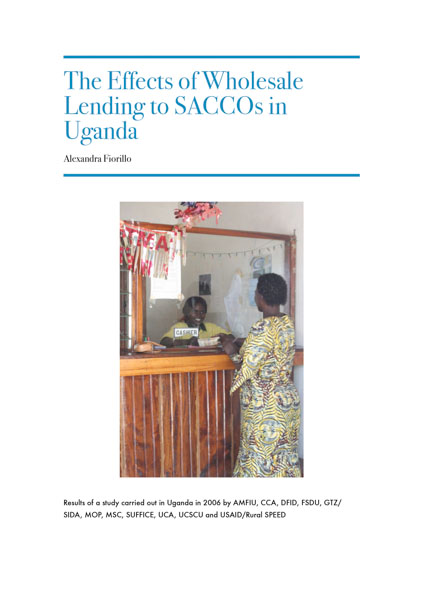 The effects of wholesale lending to SACCOs in Uganda

In Uganda cooperatives developed to support farmers involved in the production and marketing of cash crops like coffee, cotton and tobacco. Many rural cooperatives received subsidies from the GOU throughout the 1970s but trade liberalization, increased competition in world markets, and corruption caused the collapse of many of these producer cooperatives. In Uganda, only a small number of cooperatives survived and many rural farmers and workers were devastated by the failure of the cooperative movement. After almost a decade of recovery, local communities began forming savings and credit cooperatives (SACCOs) in rural and urban areas.

Currently, Uganda has about 628 operational, registered SACCOs with permanent fixed locations. In recent years, a number of agencies (donor-funded, governmental and private) have made lines of credit available to member-owned, savings-led institutions for the purpose of on-lending to SACCO members. The GOU has publicly supported this type of intervention in order to facilitate the development of rural regions by giving the rural poor increased access to financial services. However, local and international SACCO experts with long experience in the matter have cautioned the industry that imprudent on-lending to member-based, savings-led institutions can have a deleterious effect on the financial performance and organizational culture of such institutions.

This study was set up to:

The report concludes that external funds will not help a weak SACCO become strong. Wholesale lenders risk doing more harm than good when they lend to SACCOs which have weak management capacity, ineffective governance structures or a poorly performing portfolio. However, the injection of wholesale loans into a SACCO does not always have a negative effect on savings. The change in a SACCO’s savings rate (whether positive or negative) is more dependent on the management and governance structures and on the capacity building and support given to the SACCO by external agencies than the injection of external funds. In the weak SACCOs in the study, external credit changed the orientation of the institution from a savings-led SACCO to a loan disbursement institution resulting in a deterioration of the quality of the loan portfolio and amount of member savings.

Since problems in wholesale lending are closely tied to issues of governance and management, the author believes resources that are available for capacity building should be used more efficiently. There is considerable anecdotal evidence of a lack of coordination among service providers leading to inequalities in the amount of technical assistance, redundancies and overlaps, contradictory messages, a mismatch between needs and assistance given, a lack of planned sequencing, lack of accountability and conditionality among recipients, and a disconnect between institutional assessments and assistance given.

External funds can encourage better reporting procedures but unfortunately, most SACCOs do not see the inherent value in these procedures for the enhancement of the SACCO. The aging of loan portfolios and provisioning for loan losses, for example, are seen as tedious or adding further costs, and not as improving the capacity and performance of the institution.