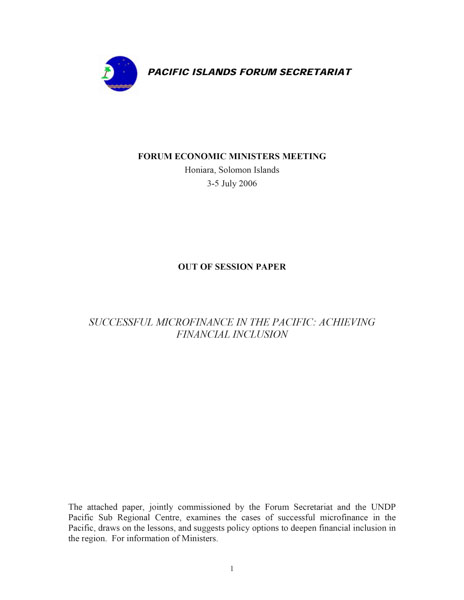 This paper states upfront that there is a ‘missing middle’ in the economies of the Forum island countries between the traditional subsistence economy, on the one hand, and the modern monetised economy on the other. It notes that in many other parts of the developing world this gap is filled by small- and micro-enterprise economic activities – the informal sector, which is often seen as a type of stepping stone.

This study argues that the reasons for the ‘missing middle’ are complex, and that microcredit is not a magic bullet capable of creating an informal sector where it is lacking in Forum island economies. Instead it points to the importance of eliminating the ‘financial exclusion’ of Forum island people – where many are denied access to any financial services, not just credit. It talks of microfinance, which is described as “the provision of a broad range of financial services such as deposits, loans, payments services, money transfers and insurance to the poor and low-income households and their micro-enterprises.” The study also argues that increased financial inclusion through the expansion of savings services (the most important, and often most neglected, of micro-financial services) brings macroeconomic benefits, as well as significant personal to households.

Innovative products offered by commercial banks in a number of Forum island countries are presented here. Low population densities and high operating costs remain a serious barrier to the viability of Grameen ‘replications’. However, it is noted that innovations in information technology that are cutting microfinance transaction costs in other regions could increase the feasibility of all modes of microfinance in the Pacific.

The study also suggests that regional initiatives are desirable to generate and share information relevant to the effort to establish sustainable microfinance processes in Forum island countries. Microfinance practitioners in the Pacific are often professionally isolated and would benefit from networking with their peers in other countries.

The paper is set out as follows: