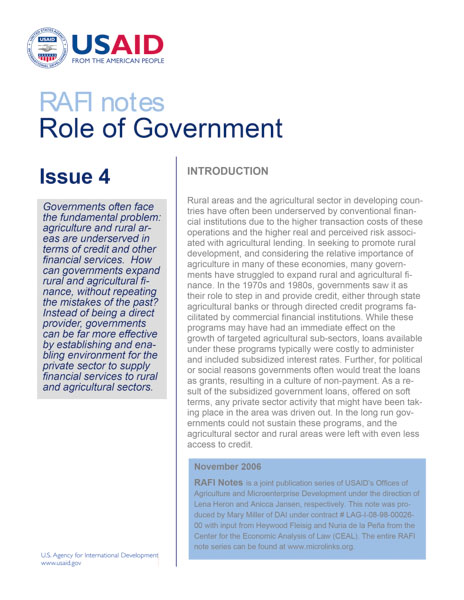 This brief notes in its introduction that rural areas and the agricultural sector in developing countries have often been underserved by conventional financial institutions due to the higher transaction costs of these operations and the higher real and perceived risk associated with agricultural lending. In seeking to promote rural development, and considering the relative importance of agriculture in many of these economies, many governments have struggled to expand rural and agricultural finance. In the 1970s and 1980s, governments saw it as their role to step in and provide credit, either through state agricultural banks or through directed credit programs facilitated by commercial financial institutions. While these programs may have had an immediate effect on the growth of targeted agricultural sub-sectors, loans available under these programs typically were costly to administer and included subsidized interest rates. Further, for political or social reasons governments often would treat the loans as grants, resulting in a culture of non-payment.

With these failures as backdrop, the brief highlights that governments often face the fundamental problem: agriculture and rural areas are underserved in terms of credit and other financial services. How can governments expand rural and agricultural finance, without repeating the mistakes of the past? Instead of being a direct provider, governments can be far more effective by establishing and enabling environment for the private sector to supply financial services to rural and agricultural sectors.

This brief aims to provide guidelines for government intervention.