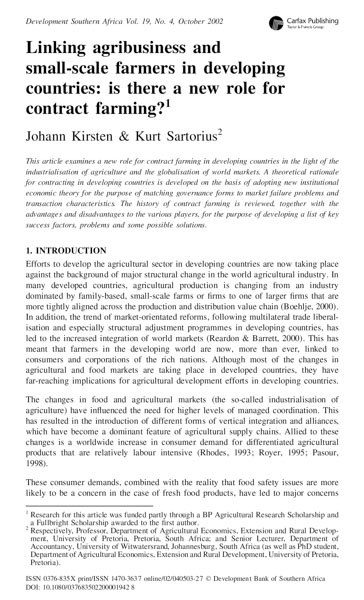 Linking Agribusiness and Small-Scale Farmers in Developing Countries: Is There a New Role for Contract Farming? - English

Linking Agribusiness and Small-Scale Farmers in Developing Countries: Is There a New Role for Contract Farming?

The premise underlying this article is that changes in the food and agriculture markets (the so-called industrialisation of agriculture) have influenced the need for higher levels of managed coordination and have led to issues for developing countries. For example, the need to control for high perishability and safe handling involves specialised production, packing techniques and also investment in research, development and marketing, which small and medium-sized enterprises cannot easily afford.

The article also highlights the theoretical arguments for the introduction and growth of contract farming in developing countries since the early 1960s, and briefly summarises the experience with contract farming. A theoretical rationale for contracting in developing countries is developed on the basis of adopting new institutional economic theory for the purpose of matching governance forms to market failure problems and transaction characteristics.

The next section discusses the benefits and disadvantages for the various players of such contractual relations and, finally, the aspects of contractual relations that would require attention to ensure the success of future ventures between agribusiness (private or state sponsored) and smaller growers are discussed.