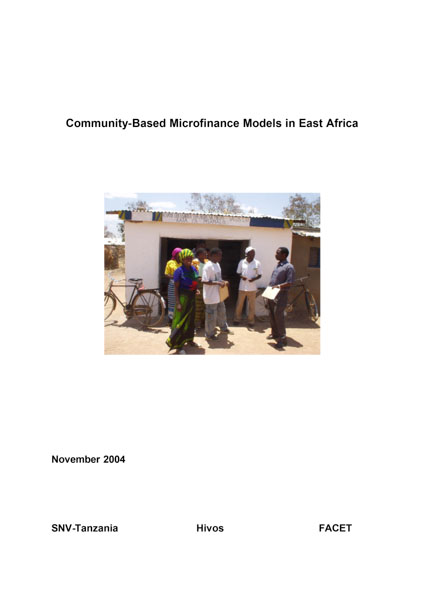 This paper notes that facing increasing competition and market saturation in some urban markets, urban based microfinance institutions (MFIs) slowly start to discover that rural areas offer significant business opportunities. However, the challenges of costs, risks and adaption of products and methodologies, have so far confined the operations of both commercial banks and NGO-type MFIs to the more ‘urban’ segment of rural areas (e.g. market towns, business people).

The paper states that beyond the dominant paradigms of microfinance, concepts and methodologies are being developed that aim to reach the rural poor (especially farmers) in rural villages. This study notes that in East Africa, over the past five to ten years this has resulted in several new or improved ‘models’ for rural, community-based MFIs. In this publication the term Rural Financial Institutions (RFIs) is used to cover a variety of organisational and legal forms: SACCO, Microfinance Association, Financial Services Association etc.

The first part of the paper presents a brief overview of four selected models from Tanzania, Uganda and Kenya:

Following on from this, the second part of the publication then focuses on sharing lessons learned in the implementation and promotion of community-based microfinance. Although the lessons drawn up are mainly based on experiences in Tanzania, it is felt that many of the issues, lessons and ‘preconditions for successes’ generated go beyond the specific situation of Tanzania. As such, they should be useful to those involved in the promotion of community-based microfinance initiatives elsewhere.

The topics covered in the second section are: