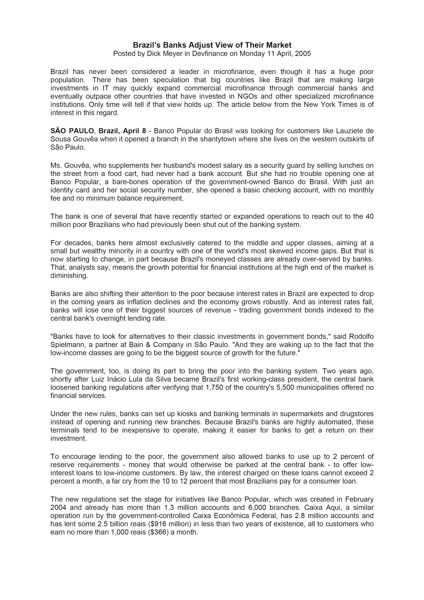 Dick Meyer speculates that big countries like Brazil which are making large investments in IT may quickly expand microfinance through commercial banks and eventually outpace other countries that have invested in NGOs and other specialized microfinance institutions.

He quotes a New York Times article which explains how for decades, banks in Brazil almost exclusively catered to the middle and upper classes, aiming at a small but wealthy minority in a country with one of the world’s most skewed income gaps. That is now starting to change, in part because Brazil’s moneyed classes are already over-served by banks. That, analysts say, means the growth potential for financial institutions at the high end of the market is diminishing and they are waking up to the fact that the low-income classes are going to be the biggest source of growth for the future.

Under new rules, banks can set up kiosks and banking terminals in supermarkets and drugstores instead of opening and running new branches. Because Brazil’s banks are highly automated, these terminals tend to be inexpensive to operate, making it easier for banks to get a return on their investment. To encourage lending to the poor, the government also allows banks to use up to 2 percent of reserve requirements – money that would otherwise be parked at the central bank – to offer low-interest loans to low-income customers.

Banks like the privately owned Lemon Bank in São Paulo that operates exclusively through automated teller machines in outlets like bakeries and corner stores, are more interested in providing basic financial services than in offering credit. “There’s a lot of romanticizing about credit,” said Michael Esrubilsky, Lemon Bank’s general manger. “What our client really needs is convenience to pay bills, to not have to spend an hour to get to the nearest bank and to not have to spend 10 reais on transportation to get back and forth.”